It’s now very sunny in Colorado today, but last night it was super wet and rainy. Very moody and inspirational, in my opinion. It reminded me of another wet and rainy (and inspirational) night I had back in Spring 2016, during which I wrote my first short story I ever had “published.” I use the quotes because it was just in my high school’s written portrait, but hey, if it’s good enough for them, it’s good enough for the internet.

Since they deemed it good enough to be published, and because I believe in raw authenticity, I haven’t edited the story. Also, it’s a very experimental piece–I was playing with ambiguity at the time… So I would like to remind you of this–high-school-writer-me is not current-journalist-blogger-me. But she did shape me and I think it’s only fair that y’all get to see some of that evolution… so here goes:

A flash. A rumble. The gentle tapping of rain against the window was one of three sounds in the dimly lit room. The two other sounds were the scratching of pen against paper and the soft breathing of one who was hard at work.

It had been storming for the past hour, but the howling of the wind had died down long enough for there to be peace. It started up again now, simply cooing, but it was enough for the figure to slowly lift its head and peer curiously toward the window. Outside was black, the moon and stars were obscured by thick clouds, and the only light in the room came from a solitary lantern on the corner of the desk covered with piles of papers and books. The figure was as lonely as the lantern on the desk, working day and night on a manuscript, pausing only for brief rests and even briefer meals. The floor around the table was littered with plates, the crumbs of past meals were a calling card for the mice who would occasionally dart out if they were brave enough. Of course the cat was enough to deter anything from disturbing the figure at the desk, prowling around like some sort of guardian.

The thunder roared again, louder this time, but instead of the figure looking toward the window, it was the cat who stirred. Its long tail flicked and its luminous amber eyes opened, sleep still clouding them. It yawned and sat up, stretching its lithe black body before sauntering over to the figure at the desk, it jumped up, precariously close to the lantern, but the figure took no notice. The cat stared at the figure, unblinking and cocked its head to the side before it began to groom itself. Suddenly it looked toward the window before looking anxiously back at its master. Little did the figure know, the rain and the wind would begin to pick up, and the cat meowed at the figure–panicked. Without looking up, the figure hissed at the cat to be quiet. Annoyed and confused, the cat stood up and walked across the papers to sit right in front of the figure, flicking its tail side to side as it went. The figure tried to shoo the cat away but failed, the cat simply batted the figure’s hand away and looked toward the window, meowing loudly, a warning.

Just then, a gust of wind forced the window open even more and with the wind, rain came flying into the room with great force. The cat screeched and jumped off the desk, desperate for cover as papers went flying about the room. On its way down, the lantern was knocked over and smashed on the floor, fiery oil spreading about the room. “NO!” the figure cried—all the work was for not. They scrambled around, desperate to recover any of the surviving pages that had not become subject to the fire’s formidable force. The cat darted toward the door, scratching at it, desperate to get out, meowing more frantically than ever. The figure, meanwhile, was in a daze, unable to comprehend that the entire manuscript, or rather collection of manuscripts was being destroyed before their very eyes. They sunk to the ground in disbelief and denial; the cat turned toward its master and saw them there, in the middle of the floor, the fire becoming threateningly closer. The cat darted toward its master and swiped at their hands, but to no avail, it was as though the figure was in some sort of trance, paralyzed by the despair that came with the destruction of their work. The cat meowed loudly again, this time scratching the figure’s face. That did it, the figure blinked, as though they had just woken up and looked around the room. Flames began crawling up the walls of the room, devouring everything they touched, the papers, so lovingly written were now being lovingly caressed by flames as they shriveled up.

Panic stricken, the figure leaped to their feet, clutching the cat to their chest in an attempt to save the animal that had saved their own life. The figure bolted to the door, at first struggling with the handle–it had always been sticky. Finally, after some difficulty, the door gave way and swung open, the figure, with the cat stowed as securely as possible under their long coat ran out the door and down the stairs, racing against time and death as the fire began to spread across the rest of the old house. Beams in the ceiling fell, and the figure dodged them, but only barely; the front door was just in sight, but just out of reach when a great beam fell directly in the way of the figure’s path. They looked around frantically, looking for any means of escape and then they saw it, there was a small window directly to the figure’s right and they dashed for it. Upon coming to the window, the figure realized they could not fit through the window with the cat in their coat, so they took the coat off, wrapped the cat securely in it, and gently but quickly tossed the bundle out the window. Then, without wasting time, the figure scrambled through the window, narrowly avoiding the bundle. They scooped it up and began to run down the road, yelling for help, but this was pointless as there were few other people anywhere near the figure’s home.

After running for a good few miles or so it seemed, high on adrenaline, the figure slowed, realizing that they were far away from their burning house. The figure stopped, doubled over, gasping for breath, only then did they remember that the cat was still in their coat and was probably close to suffocating itself. Frantically, the figure untied the bundle that was both coat and cat, but when they opened it, the figure let out a sob. The cat was not moving, it looked dead. Its once beautiful soft coat was covered in soot and looked crusty and burnt. Its tongue was sticking out slightly as well and its once beautiful amber eyes were closed. The figure clutched the cat to their chest once more, weeping, willing it to be alive once more. But the cat did not move, no matter how much the figure cuddled the cat. Finally, exhausted both emotionally and physically, the figure laid down in the grass, still holding onto the bundle that was once coat and cat, and promptly fell asleep.

The figure’s dreams were troubling and unclear. There were many figures, many parties, but in every dream, there was the cat. Sometimes the cat acted as though the figure was not there, while other times, the cat was very enthusiastic to see the figure. But regardless of the setting, the figure could never quite reach the cat in the dream. They would get close, almost touching, but whenever the figure extended to pet the cat, to hold it, the dream ended. The figure awoke then, suddenly aware of the sound of the wind around them, the feeling of the grass under them, and the slight stinging of the rain as it fell. Despite all this, the figure would not open their eyes, for if they did, then there would be no going back—no way to connect with that loyal cat ever again. A tear slid down the figure’s cheek from under their closed eyes just thinking about the cat. About how it used to bang on its plate when it wanted food, or how the cat almost always jumped on the desk while the figure was working. The figure didn’t open their eyes, but then, there was a warm, soft yet scratchy feeling followed by a soft furry something on the figure’s cheek. Another tear slid down the figure’s cheek as they let out a long sigh. An overwhelming relief washed over the figure, and their stress diminished. Sleep began to fall over the figure once more as the soft furry something huddled close to the figure.

Thank yo so much! I hope you enjoyed it! Be sure to look out for my blog/vlog on Thursday! P.S. I strongly considered using this as the feature photo because it made me laugh, but it didn’t quite fit the vibe… I’ll paste it down here instead. 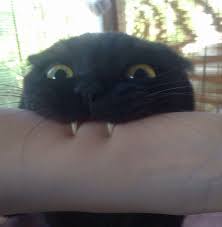 One thought on “Surprise! A short story”

Hello! I’m always looking for recommendations for new books to review and if you’re an author, I’m excited to help you get your book out into the world. I don’t typically read science fiction and prefer paperback to digital, but can be flexible with these parameters. If you would like me to review your book, click here to drop me a message (if you have Twitter and/or Instagram, please include your handle) about your book and the best way to access it. I look forward to working with you!

I am booked through June and will be taking August off of reviews, will possibly post other shenanigans :)

Next available dates are July of 2021.

To view information about this challenge and its submissions, click here.